While Lisanne Jenkins, research assistant professor of Psychiatry and Behavioral Sciences, was earning her PhD at the University of Melbourne, she studied patients who had undergone surgery on their prefrontal cortex. She noticed that patients who had ventromedial prefrontal cortex lesions — damage to the lower part of the middle of the front of the brain —  displayed similar behavior to people with behavioral variant frontotemporal dementia: their behavior was socially inappropriate, or disinhibited. Jenkins also learned about a method prevalent in psychiatry: the Research Domain Criteria (RDoC) approach, which seeks to provide a framework for understanding mental disorders, focusing on genetics, neuroscience, behavioral science, and other cross-dimensional approaches. These experiences sparked Jenkins’ interest in studying the brain circuits that underlie psychiatric symptoms across disorders, like dementia.

As part of Northwestern’s Neuroimaging and Applied Computational Anatomy Lab, Jenkins recently published “A transdiagnostic review of neuroimaging studies of apathy and disinhibition in dementia,” specifically in people with behavioral variant frontotemporal dementia and dementia of the Alzheimer’s type. In this article, Jenkins defines apathy as the “quantitative reduction of goal-directed activity compared to a person’s previous level of functioning” and disinhibition as “socially inappropriate behavior,” and describes the measurements she used to quantify these symptoms.

The RDoC framework is used throughout the work to filter the symptoms through lenses of different domains, like systems for social processes. Though more common in the field of psychiatry, the framework is useful for studying symptoms and behaviors that occur across many different neurological diagnoses. 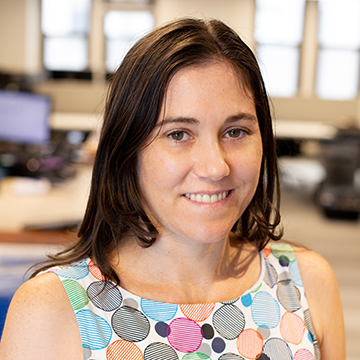 “The thing about dementia and aging is that a lot of people don’t have just one kind of disease in their brain,” says Jenkins, a KL2 scholar at the Northwestern University Clinical and Translational Sciences Institute. “These patients end up having a combination of different neuropathologies.”

Jenkins asserts the RDoC approach as having great potential to uncover circuitry that could be targeted for treatments of symptoms rather than disease-modifying interventions.

The psychiatric symptoms of disinhibition and apathy in dementia are extremely distressing and difficult to manage symptoms for caregivers of individuals with the disease, which can lead to increased institutionalization of people with dementia.

Jenkins notes that, in the study of dementia, these psychiatric symptoms are frequently overlooked. However, in early stages, sometimes these symptoms can present before cognitive impairments like memory loss. Jenkins stresses the importance of studying this vital area of neuropsychiatric symptoms.

“It’s a big passion of mine,” says Jenkins. “This is a neglected, not so popular, but really important area of study.”