As a child growing up in Lagos, Nigeria, Hadijat Makinde knew she wanted to study medicine. Making that dream a reality has involved a transcontinental journey, a full-time job at a Motorola assembly line as an undergraduate student, and years of study.

“The most important thing is the thirst for knowledge, the thirst for learning new things,” says Makinde, PhD, Medicine in the Division of Rheumatology. “I just feel like as a human being, you can't be dormant, and you should always want to learn something new.”

Reaching this point has been a long journey in the making. To pursue her bachelor’s degree, Makinde moved to the United States, where she studied biology at the University of Illinois Chicago.

“First, I had to adapt to a bunch of things: culture shock, lifestyle adaptations, and things like that. And then I basically had to work all the way through college,” says Makinde. 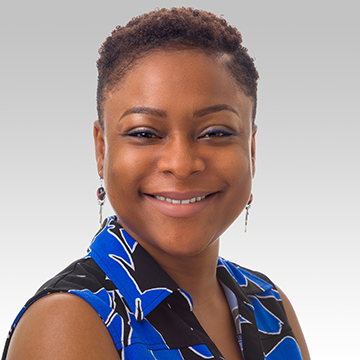 Despite having to work full-time on top of being a student who just emigrated to the U.S., Makinde says the rigor of her schedule seemed normal once she got used to it.

“When I immigrated I was 19 years old. I was young and had a lot of energy, so to me it was normal. When something's the only thing you know, it's not a big deal. So, to me it was normal to wake up, go to school, and then go to work after,” says Makinde. “Then you go home, do your homework, and rinse and repeat the next day.”

At the University of Illinois Chicago, she debated becoming a pharmacist or a medical doctor, but held reservations about each. She spoke to a professor and convinced him to let her try her hand at research. She worked her way up from washing and autoclaving beakers and tools to doing her own small-scale independent study. Once she discovered research, she knew that was what she wanted to pursue.

However, after graduating from UIC, Makinde was faced with debts that could have slowed her career. With help from the National Health Institutes Loan Repayment Programs, however, Makinde was able to continue doing research without that financial burden. The NIH Loan Repayment Program offers to pay off educational debt in exchange for a commitment to conduct NIH mission-relevant research.

After attending graduate school at Rush University, Makinde started working at Northwestern University Feinberg School of Medicine in the Department of Surgery. She has since transferred to the Department of Medicine in the Division of Rheumatology, where she is now a mentee under Chief of Rheumatology Harris Perlman, PhD, as part of the KL2 program.

“I've had a few mentors, and Dr. Perlman is one of the best,” says Makinde. “I like that he has an open-door policy. So even though he's chief of Rheumatology he's not hard to reach, at least for me as a mentee. If I'm having problems, I can send him a text ... and he calls me right away.” 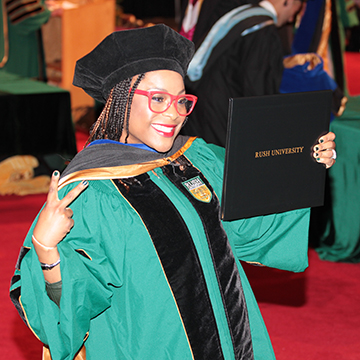 As a KL2 scholar working in rheumatology, Makinde’s research focuses on scleroderma, an autoimmune rheumatic disease. Specifically, she is looking to understand the transcriptional profiles of macrophages in people who have scleroderma in order to help treat the disease and improve the quality of life for patients.

“Different people have different transcriptional profiles. And if we're able to identify those profiles, and possibly target certain pathways in those profiles, we might be able to better treat the disease to improve quality of life for those people or maybe eventually find a cure.”

She adds that finding a cure is a “long, long way down the road,” but that’s ultimately the goal. Even if that goal may be far away, what propels her forward is the constant desire to learn.

As she takes advantage of opportunities presented through the KL2 program — from meeting other KL2 awardees to attending lectures from industry professionals — Makinde said the program has been very positive. She is continuing to work with Perlman to apply for grants, generate data, and plan for the future, all while challenging herself in new ways.

“I can’t know it all,” she says. “But that’s what drives me to continue doing what I do.”